This month we are celebrating Halloween and what better way for us to do so than to take  look at some of the world’s craziest, haunted and scary pools? Let’s dive in!

Although no tragic accident was ever logged in the Queen Mary ship’s records, there a scores of people who claim to have seen ghosts haunting this now abandoned pool. The ghosts seen in the haunted first class swimming pool seem to be exclusively female, and there are reports of at least one adult woman and a little girl, named Jackie, that haunt this location frequently. Today, the pool is a highlight of the “Haunted Encounters Tour” at the ship’s final resting place (sort of like a grave site) of Long Beach, CA. Tour guides hum the song “Twinkle Twinkle Little Star” in hopes for a visit from little Jackie, whose cries can allegedly be heard echoing through the cavernous space. As if that’s not scary enough, there are often reports of wet footprints around the empty pool’s edges. No thank you! 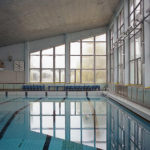 Now, we haven’t heard anything about actual hauntings at this pool site but, aren’t abandoned cities fascinating? On the left you can see that this pool was a fun and beautiful recreational pool. Prior to the 1986 nuclear disaster at Chernobyl, the town of Pripyat had a population of 49,400. Completely evacuated in just two days, its citizens were forced to abandon all possessions, leaving Pripyat a ghost-town. Though not officially sanctioned as safe to enter, curious and brave (or maybe just too curious) urban explorers have recently begun documenting the city’s remains for the world to see. Now, 30 years later we see (below) what a pool looks like when humans abandon their city and let nature take over. The Devil’s Pool is Super Scary!

In South Africa we have found the scariest pool of them all. Are you ready for it? The Devil’s Pool. After thousands of years of erosion, many rock pools have formed and one of them has formed right on the very edge of the sheer drop. This is truly the ultimate infinity pool! The view from the edge is completely exhilarating as you feel the force of the Zambezi River flowing past you and watch it as it crashes down over the rock cliffs. When the river flow is at a certain, lower level, usually between September and December, a rock barrier forms a wall with minimal current, allowing adventurous swimmers to splash around in relative safety a few feet from the point where the water cascades over the falls.

Are you ready to talk with us about your new pool, remodel or other project? Contact us today for a FREE estimate!

We love adding quirks and our customer’s own flair to a pool but, we certainly ensure that your pool is built with safety and enjoyment in mind. With over 25 years of pool building expertise, we have the knowledge and skills needed to transform what you envision into your ideal backyard. The addition of ghosts and haunts is your choice. We hope everyone has an amazing Halloween!