The President of Premier Franchise Management, Aaron Gurley, is proud to announce the owners of each location: veteran owners of the Central Illinois location, Nathan and Rachelle Whiteman, are expanding their territory into West Chicago, and Chuck Mihalcoe is the new Premier franchise owner in Richmond, VA.

“Our company culture is unlike any other because our franchisees are supportive of one another, share knowledge, and celebrate successes.”

With these new additions, Premier continues building its reputation for innovative design and excellent customer service. And it all begins with an in-home consultation where Premier works with each client to bring their backyard vision to life without going over budget.

Premier began offering franchise opportunities in 2014 to like-minded entrepreneurs with high standards for quality and value. If you’re interested in owning a Premier franchise, please visit premierpoolsfranchise.com or call (844) 366-2102. When asked how they found PPAS, Nathan answered, “My feeling is that PPAS found us. I was searching for a way forward in the family pool business, but the industry is not one where your competitor down the road would share his best practices or give advice or a helping hand. PPAS provides that family atmosphere, and as soon as we discovered each other, I knew it was our path forward.”

Nathan and Rachelle have been married since 2016 and have three children. They enjoy time with family, weekend camping trips, and performing music with their church’s worship band on Sundays.

After earning a BBA in Marketing from Radford University, Chuck Mihalcoe became a concrete salesperson for Branscome Incorporated. He 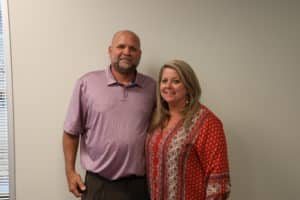 then moved on to start his own concrete construction company, which he owned for 24 years.

“I’m a person who values quality first, so choosing Premier was the obvious choice,” said Chuck. Chuck’s knowledge of concrete construction will help him bring a Premier-quality pool building experience to his clients, fulfilling their visions and dreams.

Chuck’s wife, Wendy, is a reading specialist with Newport News Schools. His daughter Hope, a freshman in college, will be working with him at Premier, while his two younger boys are still in high school, where they play baseball.

Founded in 1988, Premier Pools & Spas (PPAS) has a reputation for first-class results within the customer’s budget.

PPAS builds and services swimming pools and spas for homeowners across the country.